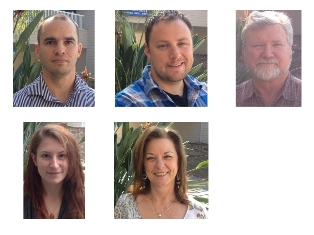 Joshua Sebastian graduated in 1999 from the U.S. Coast Guard Academy with a degree in Naval Architecture/Marine Engineering. Upon completion of graduation he served as a commissioned naval engineering officer in the United States Coast Guard for nine years. Upon receiving his commission, Joshua served as a student engineer and division officer on the USCGC CHASE (WHEC 718) becoming a qualified underway engineer of the watch and an underway deck watch officer. Other assignments in the USCGC include that of a damage control instructor and a port engineer. More recently, Joshua worked at Bristol Harbor Group, Inc. as a Senior Naval Architect. Over his five year tenure at BHGI, he was responsible for conceptual design, detail design and project management for new construction and major conversion work on commercial passenger and work vessels. Joshua is a recognized Professional Engineer in the state of Connecticut.

Michael Capitain graduated in 2008 from the University of New Orleans with a B.S. in Naval Architecture and Marine Engineering. His previous work experience includes working as Assistant Naval Architect at Chesapeake Shipbuilding, and as a Test Engineer at NAVSEA Carderock, where he conducted hydrodynamic tests, data analysis and development of numerical tooling. Michael was originally part of BHGI before moving to Texas to help bring TSGI to the forefront of the industry.

Ronald Sikora graduated in 1977 from University of Southern Mississippi with a degree in Applied Sciences with an emphasis in Engineering Drafting and Design Applications. His background ranges from facility and civil engineering to shipyard/marine engineering to military master planning. He has over thirty years of experience in design, maintenance and operation. Ronald is currently working as a Designer for TSGI providing engineering support with a primary focus on modifications to existing systems for the client base and supporting engineering staff on projects.

Jacqueline Ellis obtained her Associates Degree in Applied Science from San Jacinto College in 2012. She was born and raised in Pasadena, Texas and has enjoyed working for TSGI for the past six months.

Jo Ann Pitzer worked in the child nutrition industry for 27 years. She is a mother of two and grandmother of three. Before coming to TSGI, she worked as an administrative assistant for one year. She has completed her first year with TSGI and is looking forward to her future with TSGI.

The Shearer Group, Inc. is the global leader for design of inland towboats and barges. We have a rich history of providing naval architecture and marine engineering services to the marine industry, with a focus on the inland sector. Inland barges built to our designs number in the thousands, along with a myriad of towboat, dry dock and other specialty designs. Further, we are proud to be one of the only naval architecture and marine engineering members of The American Waterways Operators, Inc.