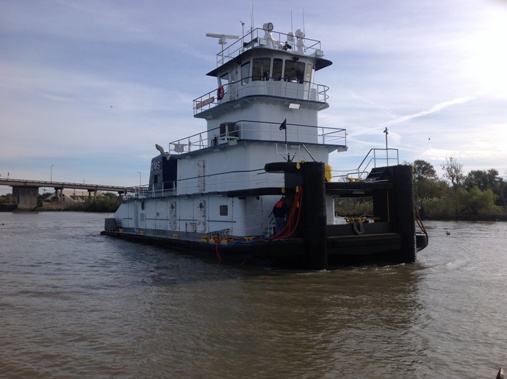 Deloach Marine Services, LLC, and A & Z Marine, LLC, are pleased to announce the completion of the “M/V Z SHARON.” Z. David Deloach is the sole owner of Deloach, which provides charter towing service along the GIWW and A & Z, his shipyard located in Port Allen, LA. The vessel was originally built by Janoush Marine, Rosedale, MS, as the “FOSTI EDDIE E.” Deloach purchased the vessel in 1984, renamed it the “BONNET CARRE,” but later sold it to American Commercial Lines in 1988 who renamed it the “DONALD C. CLARK.” Deloach operated the vessel for ACL from 1988 to 2007, when he and his partner sold their fleet to Ingram Barge Company. He later repurchased the vessel and began a refurbishment. Deloach knows the hull as a proven and efficient design, with extreme maneuverability.

The boat now is 90’ X 28’ x 10’ powered by a pair of Cummins Model QSK-38M Tier III diesel engines rated 1200 HP each at 1800 RPM turning two ZF/HRP Model 5011 WM Z-Drives. All steering and propulsion controls are electronic.  The electronic engines are set to only provide a 1000 HP output, as that is all that is needed for the type service she will run in the GIWW, which allows for fuel conservation and provide a long life for the engines and gear drives. Electrical power is provided by a pair of Cummins 6C diesel engines hooked to 125 KW Stafford/Newage generators. Cooling is done for the main engines, generators and Z-Drives with multiple Duraweld grid coolers located on each side of the boat, provided by East Park Radiator, Houma, LA.

The entire hull and superstructure were gutted, with every piece of wood, wire or pipe removed, sandblasted, inside and out, and then recoated with multiple coats of epoxy supplied by Coating Systems of Baton Rouge. Any thin metal was removed and replaced with new, and all piping and wiring replaced with new. The entire stern was reconstructed, with the rudders, shafts, wheels and tunnels removed, the hull flattened out, and additional framing and bulkheads added to accommodate the Z-Drive units. At the forward end, the towknees were removed and replaced, as was the headlog and bow corners, with a heavy-duty fleet deck added. All through-deck fittings and piping on the exterior are stainless steel.

The interior was installed as new, with the layout of the galley, living quarters, stairways and wheelhouse being modified slightly from the original. The wheelhose was raised by four feet to gain a better eye level and to provide an electronics room with sufficient headroom for maintenance and to accommodate the amazing amount of electronics typical of today’s modern towboat. Central air and heat was added, with an independent unit installed for each deck.

Potable water, wash water, fuel, lube and hydraulic tanks were rearranged in the boat for better trim and to provide the capacities which better suit her trade. Holding tanks for treated sewage and slop were added to allow the vessel to work as a Zero-Discharge vessel. This addition was accomplished by the fact that the engines and generators, which are typically located in the lower engine room, were removed and relocated to the main deck in the engine room leaving the lower engine room available for other uses.

The “M/V Z SHARON” now holds 22,000 gallons of fuel, 8125 gallons of fresh water and 6650 gallons of potable water and various quantities of lube, hydraulic and gear oil at a 9’- 0” operating draft. She has quarters for seven, a full galley, three full heads and an engineer’s quarters.

Unlike the typical refurbishment done by Deloach where the engineering is done in his head, and considering the number of hull design changes made, Deloach chose The Shearer Group to provide drawings and calculations used when moving things around.  As this was not the typical vessel drawn from scratch by a machine, knowledge and experience was needed to make this work, and The Shearer Group of Seabrook, TX, was able to provide that.  Shearer has a long and successful history of designing and supporting the construction of commercial vessels serving the inland waterways, including towboats, inland dry and liquid cargo barges, dry docks, and floating cranes.  They also have extensive experience with the installation of the ZF/HRP Z Drive units used in this application.

Besides the installation of the Z Drive units, there are several unique things which were incorporated into the design which Mr. Deloach has learned over the years.  The towknees are built to withstand anything a pilot can throw at them, and with the stainless fittings on the deck, the typical corrosion which eats away at the normal pipe penetrations will no longer be a problem.

The vessel is also surrounded by M&M Bumpers, built in Bourg, LA.  All the doors going to the exterior, all blower shrouds, and exterior fire hose stations, are made of aluminum and were provided by Dales Welding of Plaquemine. Winches are 40 Ton Nabrico, Electric over Hydraulic, with the power units located downstairs in the front hole, where they are protected from the weather, rather than on top of the winches up on deck.  Mufflers are hospital grade, provided by Maxim Silencers, and the entire exhaust system was insulated by Marine Exhaust Insulation of Ethel, LA.  You can hold a conversation in the engine room while running full ahead.  There are a total of six 24” blowers providing ventilation to the engine room, which caused the engineer to complain that he had to wear a jacket in the machinery space while running at full power on a recent cool day.

Deloach Marine and A&Z Marine, both located in Port Allen, La, have a well-known history of providing line haul towing services along the GIWW from Mobile to Brownsville, as well as providing vessel operating management for various barge lines.  Mr. Deloach has been in the business since first stepping on a towboat in 1979 on the Ouachita River, and continues to operate his business with two of his children coming up in the business, along with his excellent management team.

Z. David wanted to name the vessel after his wife, Sharon, of 35 years, and they decided there were just too many “Z”s involved in the vessel to not include that as the first initial for the vessel, thus the name “Z Sharon”.